I feel like it says a lot that even three years after giving birth, I still look at this sweet little human and can hardly believe that he is here, that he is mine, that I'm his mama. The fact that there is a tiny baby growing in my belly (and growing as expected) is even more surreal. I love them both so much that it hardly seems possible, and with the world spinning the way that it is, I'm left with a feeling that this happiness could be snatched up at any moment. It's not a healthy kind of fear, but it's deep, and even after years of parenthood it never seems to disappear.

The subject of school has been coming up a lot lately. Many of his friends, including his closest cousin, are reaching kindergarten age and here in Austin my parent-friends are scrambling to choose which school to send their kids and where. As for me, I've avoided thinking about the topic for pretty much his whole life, but I know that luxury won't last forever. After that day in Connecticut I wondered how I would ever be able to put my child on a school bus and wave goodbye. The truth is, I still don't know.

Every year since Sandy Hook the number of mass shootings has gone up and up. While not all of them take place in schools, way too many do. Legislation to curb the violence is beginning to feel like a pipe dream - as is any practical solution. Meanwhile, the center of my universe continues to hurtle toward the age where getting onto a school bus should be perfectly normal.

So much of me wants to swallow my fear, go the practical route, and send him to Pre-K next year, but when the time comes, I don't know that I will be able to. Home school is not a great option for a household with two full-time working parents, but I honestly doubt my ability to get past this fear. The worst part of it is knowing that while it may sound extreme, crazy even, it's entirely based on reality. No amount of therapy or self-affirmation can bring me to terms with the risk of my child being shot to death. There's just nothing worth that risk.

I don't even have to explain how infuriating and mind-boggling it is that this is even an issue. We don't live in a war-zone, so why do I have to be afraid of sending my child to school? It's thoughts like these that get me thinking about leaving this place - not just Texas, but the entire country. I think about what people go through to save their children from war, violence, or extreme poverty. I think of the risks they take trekking across continents or braving oceans in tiny rafts. I think of all that and the cost and paperwork involved in emigrating to Canada seems like a joke.

I'd like to think that I am as brave as the mothers carting their children out of Syria, but am I? Would I have the grit to do whatever it takes to keep my children safe and give them the best chance at a good life? Or am I just going to sit here and accept the rising number of school shootings every year, the unaffordable cost of health care, the seemingly never-ending attack on women's rights? What kind of future are these two kids headed for in this country?

I'm grateful to have a little more time to stall on my school decision. We don't have to do Pre-K if we don't want to, so really I could keep dragging my feet until he turns five. In the meantime I'll just keep basking in his existence. I'll keep counting his toes and sniffing his neck. I'll keep kissing his soft little cheeks and belly-laughing over his jokes. I'll try my best to notice as many of his little sister's kicks and wiggles as I can, being careful not to waste a single precious minute of what could very well be my last pregnancy.

I'll hold on tight to my kids, and I'll cry every time I open up Facebook. I'll keep hoping for and voting for legislation that could make curb the rising tide of violence, and I'll keep sending my piddly little donations to the people who are better at making those things happen than me. Sooner or later I'll have to decide what's next. But for now, I'm grateful to be able to keep them close.

Angry Mommy vs. Pepper the Wombat

So I've become that crazy lady in your neighborhood who you can hear screaming on her front lawn anywhere from mid to late afternoon. This kind of loss of control is something I've always been prone to, but I feel like I have been able to keep it under wraps and somewhat cool until recently. 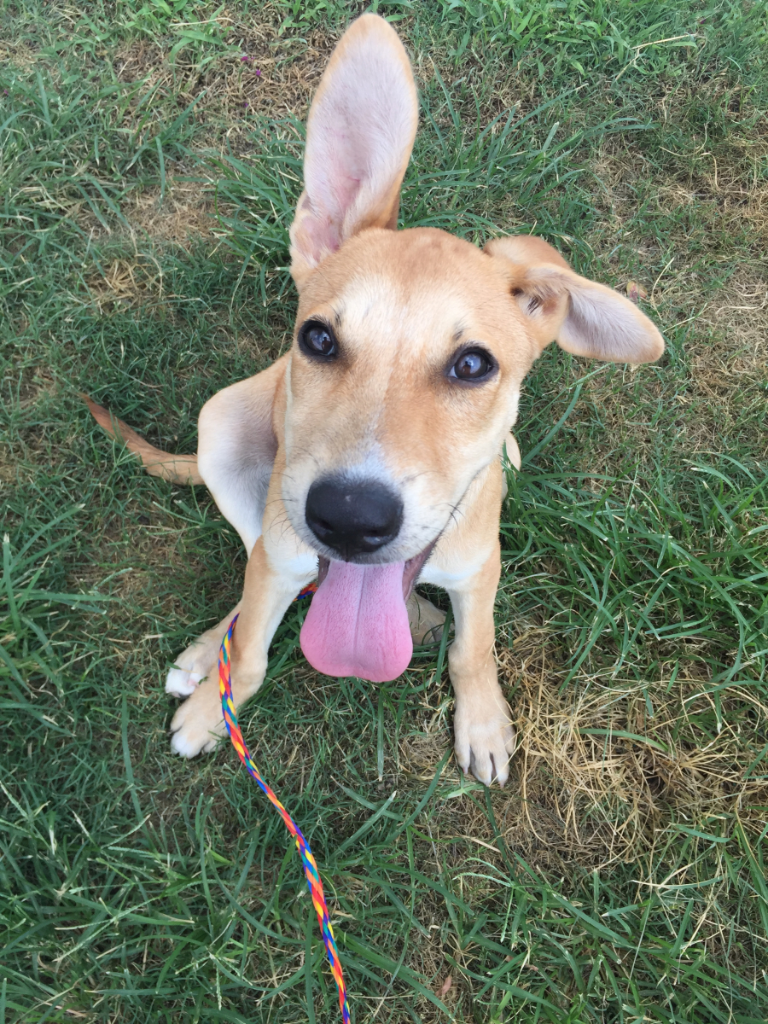 It turns out that having a puppy and a three year old at the same time is just a little bit too much for my temper to handle. Between the two of them, someone is ALWAYS harassing me in the bathroom, breaking my stuff, wrecking my garden, begging for food, whining in my face, or just straight up biting me. 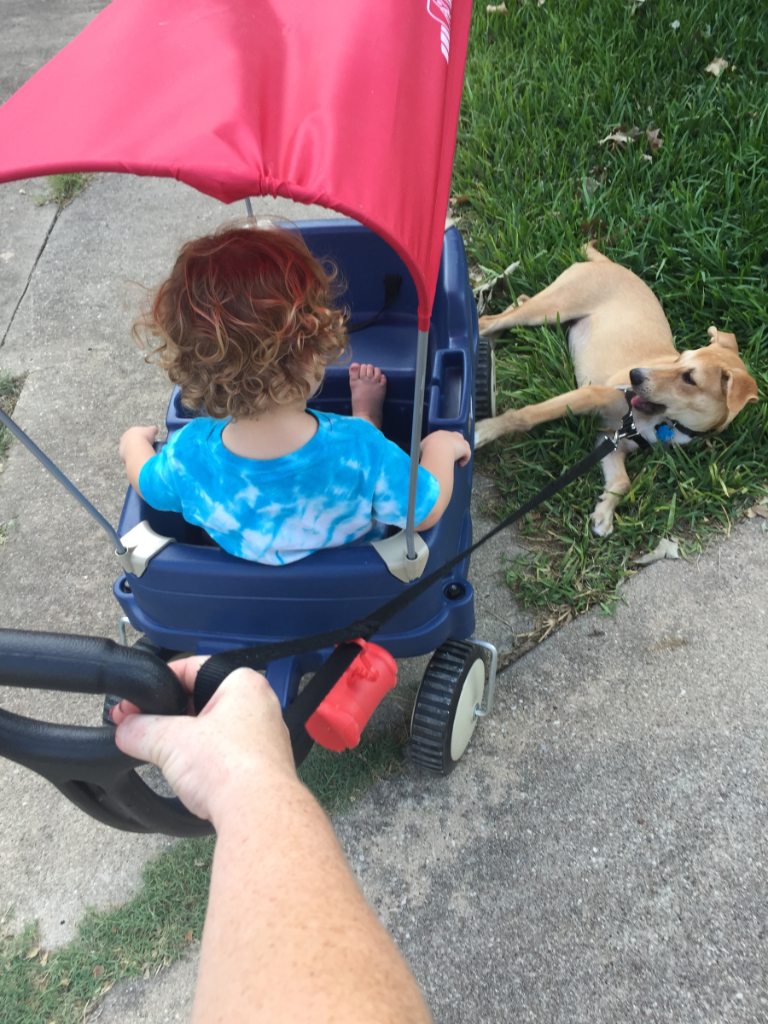 A little piece of advice for any parents out there who are considering adding a family pet.

A) Do not let your child come with you to pick it out. I was looking for a 3 year old dog under 30 pounds. I ended up taking home a puppy who the vet estimates topping off around 70 lbs.

B) Do not let your husband come with you to pick it out. (See explanation above.)

C) Do not go out to adopt a dog when it is 100F outside and you are on hormone meds that make you crazy. (See first explanation one more time.)

I am not a puppy person. To tell you the truth, I'm not even really a dog person. My kind of dog is old, fat, lazy, and goofy - kind of like a cat. I'm a cat person. But even if you are a dog person, I can tell you right now that having a puppy is more like having a raving rabid wombat in your house than having a dog. Only a wombat might bite you less. Get an older dog. If you ask me, five years old is the golden age of dog ownership. 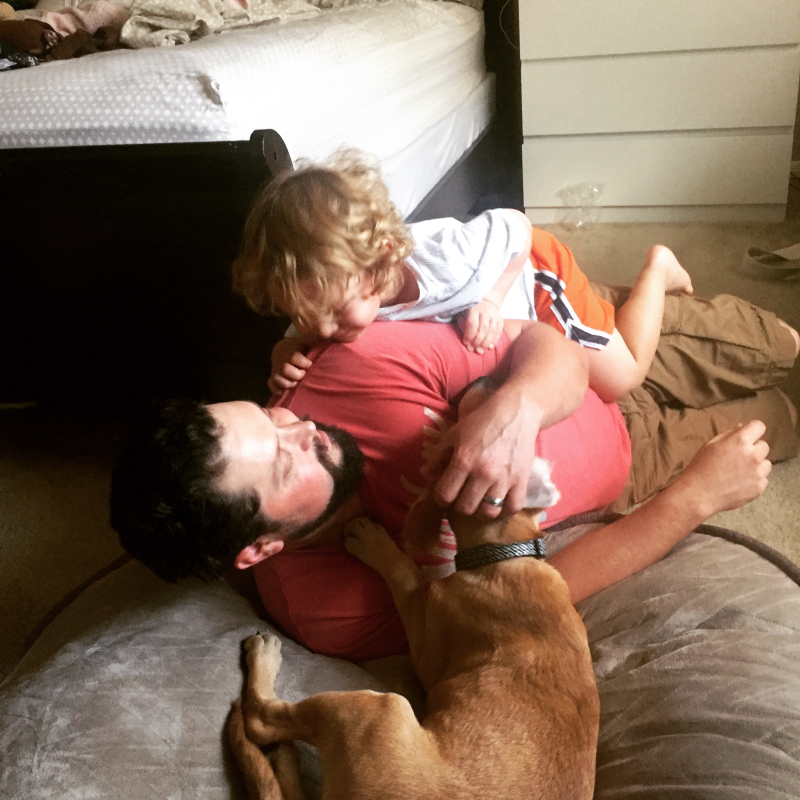 But these two? These two are totally dog people. They think this wombat dog is the greatest thing since sliced bread. They love getting bitten, jumped on, pooped at, and stolen from. They are just as crazy as she is, and I love them, so maybe Pepper the Puppy will eventually soften me up too. In any event, I am stuck with her. CC tells me daily that he will love her forever and ever and EVER and that she is not allowed to ever die.

I am in need of a very cheap dog walker and husband-proof dog training classes (as in impossible for husband to evade.) If you know of a place in Southwest Austin, please send me your recommendations - bearing in mind that we are not A+ 100% best-ever dog owner types. What we need is a dog training school designed for underachievers. Our goal is to simply downgrade from rabid wombat to wild wombat. Less biting and mauling would be nice.

If you need me I'll be out on the front lawn shrieking bad words at a very naughty dog while wrestling a crying toddler.