He's trying to bite off my nipples!

Whoever decided to give babies teeth before giving them self-control really wasn't considering the well being of mama-kind. I'm looking at YOU, deities. You've got some splaining to do. 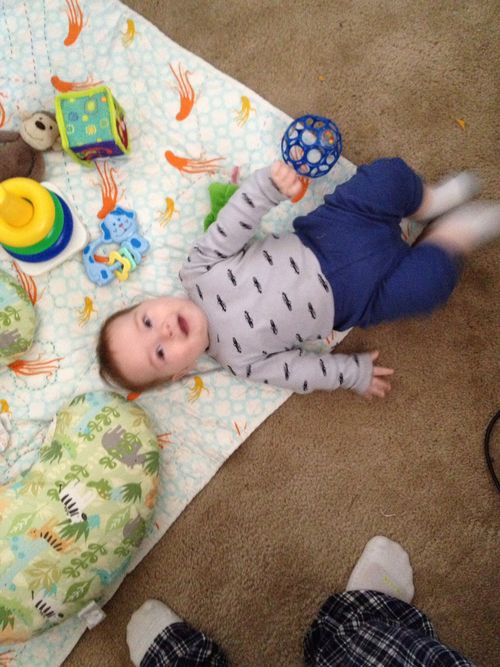 Who is this voracious barracuda and what happened to my sweet little pooky?

Six and three quarters months is long enough to breastfeed, right? Probably also a good time to kick a baby out of your bedroom... or to stop swaddling your an eighteen pound child. Guhhhh.

No one ruins Dylan like Dylan and no one guilts me like myself. Will this cycle of self-inflicted nipple trauma never end? The guilt! The pressure! The biting!

Also, happy holidays. Wishing you all a joyful and bite-free celebration. (And if you are caring for a small child I also wish you whiskey - plenty of whiskey.)

Lately I've been feeling a little trapped. For the most part I love nursing CC. The warmth, the closeness, the sheer snuggliness of it all melts my heart. Breastfeeding feels like this wonderful nurturing thing and I kind of adore it.

Other times it feels like my life force is being sucked out through my nipples. In a word, it's exhausting.

Above all, I'm just plain tired. Sometimes I find myself just wanting to run away from it all.

There have been a few times now that I've considered supplementing with formula or even weaning all together. Last time I got close a trip to a local lactation support group got me through. We thought of some good solutions to my pumping problems and they helped get me through the last two months. Then he stopped sleeping and I stopped pumping and here we are again, on the brink of abandoning the boob.

Then I remember that weaning CC isn't likely to be the magic solution I was hoping for. Formula is expensive, and there's no guarantee that CC would even go for it. Besides, I'm scared that as soon as I start supplementing my body will stop producing enough milk, burning enough calories, and balancing my hormones. And what if I'm short-changing CC by cutting him off early?

I have these thoughts and the mean little voice in my head calls me an ungrateful wimp for complaining. Can't I just buck up and stick it out for a while longer? Do it for your baby!

Trapped and tired and miserable as I might be sometimes nursing still has so much to offer both of us, so I go back and forth about wanting to give it up. I'm not sure what we'll do next, but in the meantime it feels good to vent. Thanks for listening.

Nursing is a beautiful thing and I'm grateful to have been able to do it for the past six months, but my goodness is it ever hard. 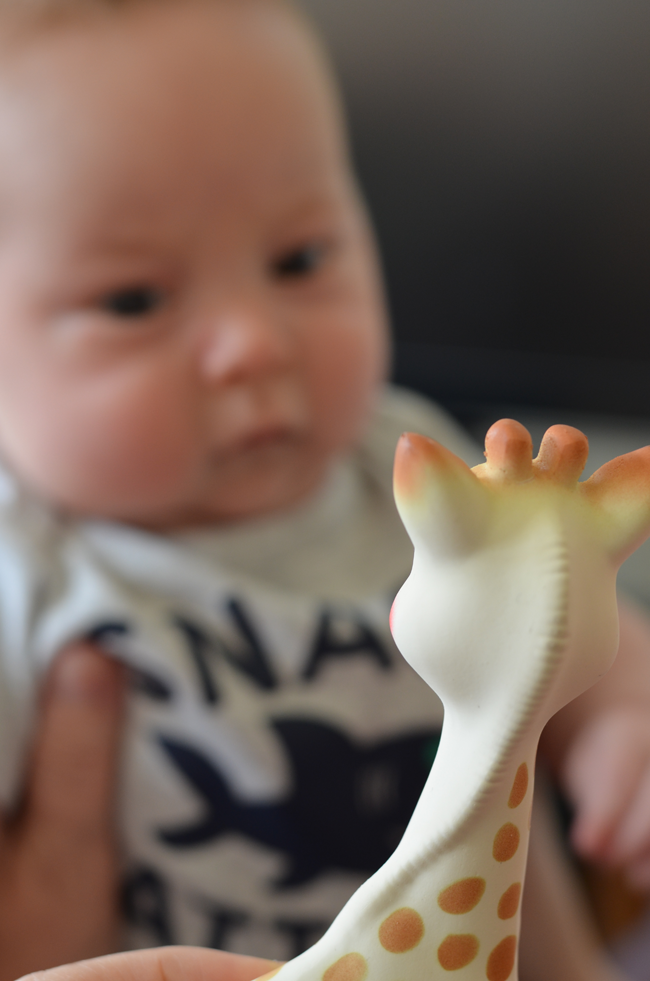 Charlie met Sophie the other day. I dangled the little rubber giraffe in front of him, and he locked eyes with her funny little face. Charlie let out a squeal of delight before bursting into a huge grin. Then he did something new. He reached out and wrapped his little fingers around her neck. A look of deep thought crossed his little brow as he paused for a moment, considering his prize. Charlie chuckled for a few seconds before shoving Sophie's head into his mouth.

Watching him gave me a great idea for a B Horror Movie: Attack of the Giant Baby. The little tike could roll around town grabbing people and slowly gumming them to death. If you could see the look on Charlie's face when he's about to eat you would totally get this.

Right before Charlie latches on he gets this crazy look in his eye. It's perfectly manaical, and sometimes it's paired with a crazed, villainous laugh. Whenever he makes that noise I know to watch out. He's about to get his nom on.

In these instances he doesn't wait for me to latch him on. He just goes for it. Sometimes he hits the nipple, and sometimes not. I've gotten a few pretty gnarly hickeys from the times he's missed. If I go in to close for a kiss, my nose often becomes a target. The last time he did it he reached out and grabbed two handfulls of hair at the same time. (The movie, Alien, came to mind.)

He's a good eater, this kid. From the very beginning he has been voracious. During his first month of life he cluster fed like a champion, going SEVEN hours on his longest feed. All that hard work has bumped Charlie into the 50% percentile for weight, no small feat considering he was born at less than five and a half pounds. 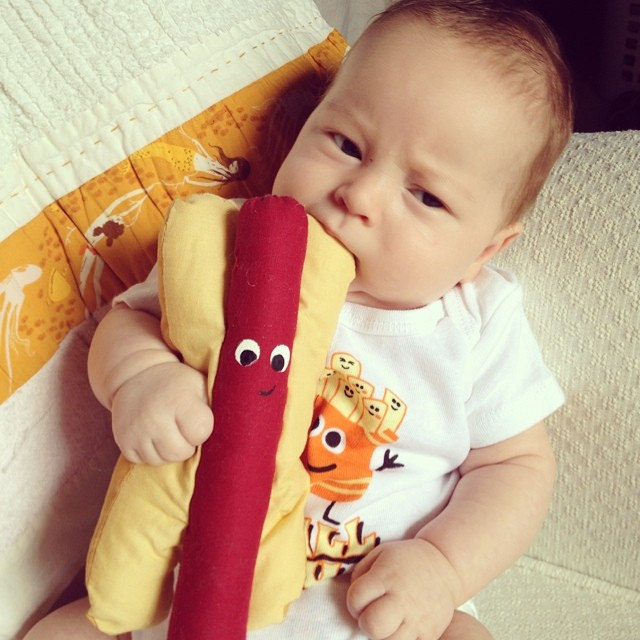 Before Charlie was born I often worried about breastfeeding. Would I have enough milk? What if my baby didn't want to eat? These are all pretty common fears, or at least I think they are. I never would have guessed that my biggest breastfeeding challenge would be dealing with my tiny baby's monstrous appetite. You see, when a baby nurses around the clock he teaches your breasts to produce mass quantities of milk. Sounds great, right?

While it is certainly a blessing to produce enough milk to feed my itty bitty beefcake, it comes at a price; eternally leaking boobs (I have to sleep on a towel), mastitis, milk blisters, engorgement, and last but not least, hours on end trapped under an endlessly demanding, but all together darling little creature. It's hard. In fact, it's probably the single hardest thing for me when it comes to being a parent right now. Oh yeah, he's also started biting me. Ouch.

So why do I bother? I've asked myself this question many times - often in the middle of the night while staring at my blissfully slumbering husband. If I put Charlie on formula I'd never have to worry about pumping enough milk to leave the house alone or to catch up on my sleep. My personal freedom would be seriously expanded (and my boobs would probably throw a party). I would be lying if I told you that I wasn't tempted by that freedom, but as great as it sounds sometimes I continue to nurse.

Why? Because despite all the challenges, (the nipple abuse, the sleep deprivation, etc.) I really love nursing my baby. I love feeling his warm little body tucked up against mine. I adore the moments where he smiles at me or wraps his tiny hands around my finger. It feels good to feed him this way. It feels right and natural to me, so I keep doing it. And thankfully, as time goes on it's becoming easier to do.

There were quite a few times that I nearly gave up. I'm really glad that I didn't.

So, to all you new mamas and mamas to be: If you are planning to breastfeed, know that it's normal to feel overwhelmed at times. Each mama and baby relationship comes with its own unique set of challenges. Get help if you need it (I have needed plenty) and hang in there. It does get easier. 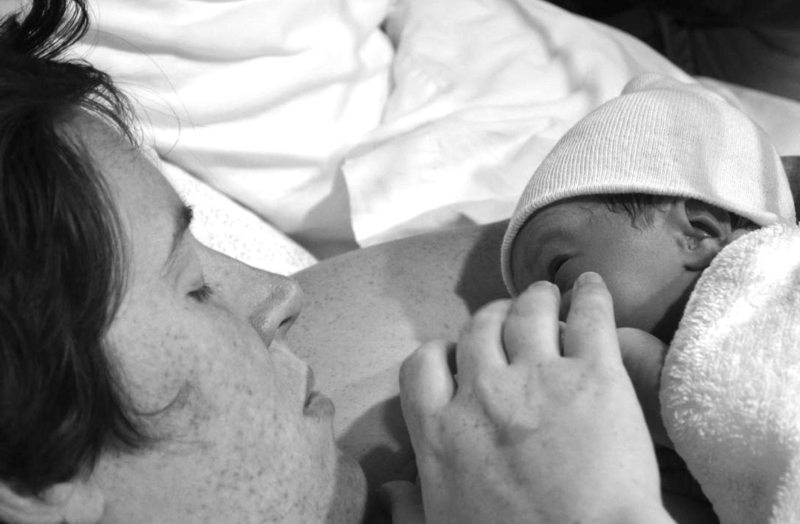