Recently CC had a major developmental leap, making him much more aware and interactive. This makes him extra fun during the day. He laughs at everything, plays little baby games with us, and even claps his hands (sort of) to show us when he's enjoying himself. It's really wild to watch him discover his world. Just the other day he found his shadow. Talk about magical moments of babyhood. I just about melted as he started waving his little arms and reaching out toward his sillhouette. 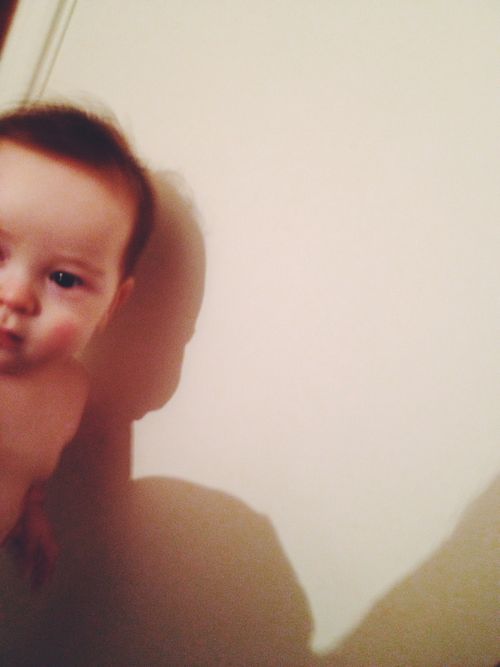 At night his new powers of observation are a little less fun. Remember how I talked about us having issues with sleep? Well, it won't come as a surprise to any of the fellow parents out there that our saga has continued.

I mentioned that our first goal was to break him of the whole falling asleep while eating habit. Well, the good news is that it worked! CC rarely passes out mid-suck anymore. The bad news is that he has replaced nursing to sleep with wigging out to sleep. He now spends the last twenty minutes of wakefulness climbing my head, pulling my hair, and trying to gouge out my eyes. It's like trying to cuddle a rabid koala bear - except with more biting.

He also does this thing where he pretends to be fascinated with just about anything he can lay his little peepers on. He suddenly can't go to sleep because he HAS TO check out this spot on the wall, like NOW. Let me tell you something: whoever invented footy pajamas with funny faces on the feet did not think that whole thing through. It's sort of like that scene in Die Hard... 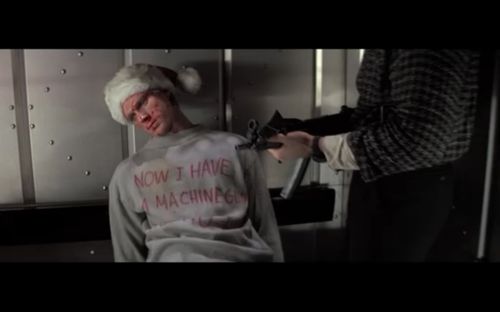 OR he just never stops sucking and somehow sleep-eats through his entire nap. And YES, I have tried breaking the latch and trying to put him to sleep. He either roots incessently for more or shoots me a huge grin and starts playing with his feet.

We are making progress though. Scott has somehow managed to sleep train CC for his own bed time and nap time shifts. It started out by Scott taking the rabid koala off of his head an putting him on our bed instead. He let him roll around and foam at the mouth and whatnot as he sang lullabies and consoled him. A few days later he started putting him in the crib instead. Then he stopped singing. Then he started sneaking away before CC was actually asleep. Now when Scott puts him to bed it seems to take all of twenty minutes. I'm still looking at an hour and change at bedtime with naps being complete wildcards.

Scott says I'd better get on board. He's probably right, but I SWEAR the kid just won't dance to this song for me. He doesn't melt down or freak out anymore, but he won't go to sleep either. He just giggles and wiggles and blows raspberries at the crib sheets until I am convinced that there is no Earthly way this child is ever going to sleep.